The showcase served as an opportunity for all members of our department to display their work. As a new school going through growth and development, the theme, Evolution, reflects the continuous changes that are being made by the school as a whole, and by individual students on their path to becoming design engineers.

We created an experience for visitors to vicariously live through the Evolution of a Design Engineer as they explored the new building. From first year work displayed as they climb the stairs, to the research work on the top floor, the exhibition demonstrated the diverse skills we develop and remarkable work we create. 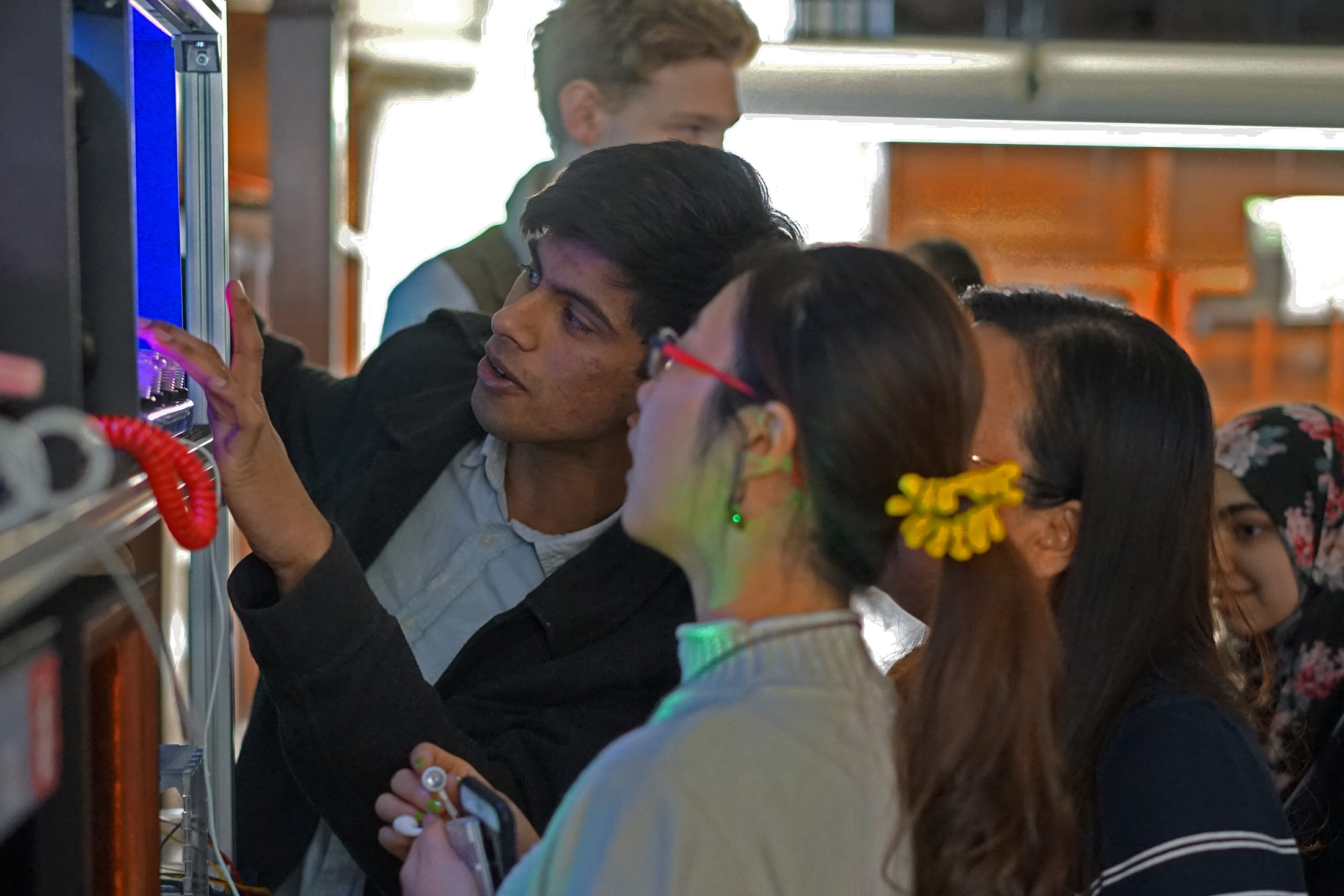 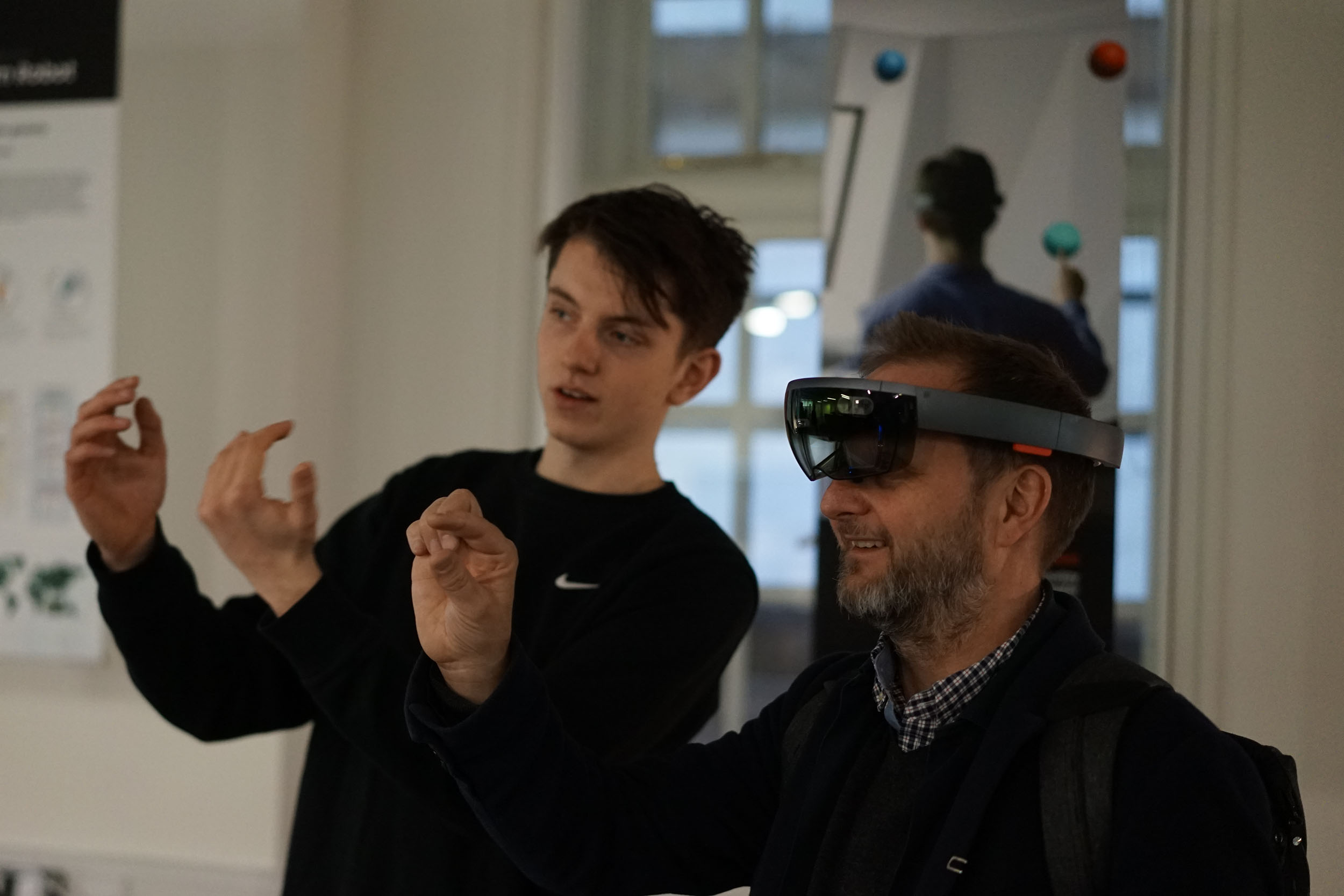 Exhibiting work was only half our challenge; we also wanted to encourage meaningful interactions for staff, students, and visitors alike. We designed the event so people could not only learn about bleeding edge ideas, but they could also meet the brilliant minds behind it all.

The Design Engineering Spring Showcase was a concept floated around by the department at the start of the academic year. With no-one taking the initiative to start the planning, halfway through the year I volunteered to lead a small team of students to work with me to help organise the first ever department-wide showcase. We had a short time-line of two months to organise an event for over 150 guests and 100 exhibitors. We were given a sizeable budget and help and guidance from the department, but the concept and execution was almost entirely our own initiative. Our job was to not only give students the opportunity to show off their work from the past year but to allow the design engineering industry as well as the public to see the kind of work our school does. We wanted to create a memorable event - polished enough that we could set a standard and increase involvement for future events.

I was part of a team of four, but the collaborators for this project extended much further than the four of us. We needed to coordinate the hundreds of members of the department to create the content for our show. As the person who took the initiative to organise the event, I was involved with all the key decisions made. The other members helped with various different tasks at certain stages in the planning process. One of the members of the team helped create the exhibition’s visual identity in the beginning whereas another member helped with logistics and procurement closer to the show date. As happens with most small teams, there were no specified roles but I ended up focusing on organisational and branding aspects while other members of the team helped create the graphics and do admin work. Even so, there was rarely a task which was completed without the entire group’s input.

With such a time constrained project and no given structure, our first point of action was creating a timetable with a series of hard deadlines for big tasks. We then wove smaller deadlines into this list in order to distribute our workload over the two months. With clearly defined responsibilities, we went on to creating a theme for the showcase. This proved challenging as we wanted unify a variety of work but simultaneously allow exhibitors to show their project’s character. To help with creating our showcase theme, we treated the problem as a user experience design challenge. This resulted in us designing everything from room layouts and flow of people to posters, templates, and logos.  The outcome was a showcase which took over the departmental building – unifying undergraduates, postgraduates, researchers, and faculty in a way that had never been done before.

The difficulty with generating a theme was that we wanted one which effectively represented the entire department in all it’s different stages – from undergraduate and masters students to PhD students and staff. With three of us generating ideas for the event, the resulting concept started to become too complicated with many different details. We wanted something interesting and relevant but struggled to create a cohesive and clear visual identity and theme. Eventually, we were able to narrow down simplify and improve our concept through outside help. We needed the point of view of someone who was not invested in any of our concepts. By asking for feedback from members of faculty in the department the resulting theme was coherent, flexible, and elegant. We created a variety of graphic design templates and guides and the end result was something we were definitely proud of.

We managed to get more than 150 people, from professionals to family and friends, to visit the exhibition. We considered the event a success, but we also knew there was room for improvement. After the showcase, we collected feedback from those involved and had several meetings reflecting on our experience of the showcase. This reflection was helpful not only for the future exhibition teams but also for our own personal development. It helped consolidate all the things I had learned throughout the process. We experienced several roadblocks in terms of encouraging participation as this was the first ever showcase; however, the final result definitely had people excited for future exhibitions. The real affirmation of our success here is that our event, although not perfect, began a tradition of department-wide showcases and built an atmosphere of camaraderie between programmes in the Dyson School.